On August 22, the 11th Annual Success Beyond Six Behavior Interventionist Conference was held in South Burlington.  This annual event, which is organized by the Designated Agency System, addresses core training competencies in which all Behavior Interventionists (BIs) must be trained both upon hire and on an ongoing basis.  NCSS sent well over 100 staff members to this year’s conference, which was attended by over 550 staff from across the DA system.

Each year the conference seeks to bring in presenters which highlight the incredibly important role these staff play in schools, communities, and the lives of the children and families they serve, along with providing meaningful training opportunities.  This year the keynote speaker was Senator Tim Ashe, who delivered an engaging address connecting the everyday work of BIs with the processes of state government.  Senator Ashe was followed by Dr. Lance Smith, a professor at UVM’s College of Education and Social Services, who delivered a powerful training on Implicit Bias, particularly focused on race.  Also included in the morning’s program was a performance by Hear for You, a pilot project featuring 12 high school students that explores the complex emotions surrounding teen depression and suicide through dance.

The rest of the day featured trainings by Designated Agency staff and invited presenters on topics ranging from Time Management to Special Education Law to Promoting Resiliency in EBD Students.  In addition to having many staff participate as attendees, NCSS was well represented among the speakers, as Amy Irish, the chair of the committee which organizes the conference, gave the conference’s welcoming remarks, Executive Director Todd Bauman introduced Senator Ashe, Matt Habedank presented the Ed Sbardellati award to Dr. Catherine Burns, and Tiffany Trombley and Tim Stanley of Soar Learning Center lead a workshop on Self Care: During Crisis, Processing & Debriefing which was extremely well received.

The event was an incredible success, and NCSS was represented at every level from direct care staff to the Executive Director.  It was a day to be proud of the DA system as a whole, but especially of NCSS and the way our staff represent both themselves and the agency. 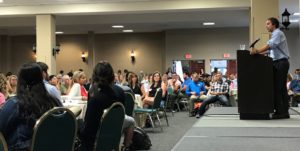